Our clients and friends often ask us to recommend interesting and helpful books that will help them better understand the markets and the economy. As a team, we think that a broad base of knowledge and understanding of economic history often helps us make pragmatic investment decisions for our clients. One of the best books our team has read this summer is a new biography of the economist John Maynard Keynes by Zachary D. Carter, titled “The Price of Peace.” We think that many of the insights developed by Keynes during the first half of the 20th century are highly relevant for 2020.

Keynes was a remarkable intellectual who played key roles in guiding the British economy during World War One, the Great Depression, and World War Two. He is still regarded as one of the greatest thinkers in economics. We believe it is particularly important for today’s investors to understand some of the lessons of the Keynes era. Since the Global Financial Crisis of 2008, the economy has been characterized by depressed demand and excess savings. Even prior to the COVID-19 pandemic, interest rates had steadily declined and many corporations were unwilling to invest in new plants and equipment. The pandemic has exacerbated the demand shortfall as households have curtailed spending and unemployment is rising.

The economy was mired in depressed demand and high unemployment when Keynes published “General Theory of Employment, Interest and Money” in 1930. In the midst of the Great Depression, Keynes proposed a radical shift in economic thinking. Prior to Keynes, economic problems were viewed from a “supply side” perspective. In essence, the world was seen to be constantly in a state of scarcity, and therefore it was thought that economic policy efforts should be focused on increasing supply of labor and capital. Demand was not seen as a constraint.

Keynes recognized that the advent of mass industrialization had the potential to reduce scarcity constraints, and that the economy can also suffer from insufficient demand. Keynes saw that during hard times households changed their “liquidity preferences” and deferred consumption in order to hoard cash. Companies also hoarded cash and cut capital projects. But one person’s expense is another’s income. Thus, as households scrambled to save more, they caused a deflationary cycle of falling prices. Keynes also recognized that a depressed economy can lead to increased support for political extremism as he witnessed the rise of Fascism and Communism. Keynes argued that the government should intervene in these circumstances to spur demand through fiscal spending. It would not be enough for central banks to provide liquidity to banks if households and companies were not interested in taking out loans and spending themselves. There would need to be a “spender of last resort” to spur economic activity and return the economy to its full potential.

So far during 2020, the economic impact of the pandemic has been cushioned by rapid and dramatic interventions from monetary and fiscal authorities. Faced with the COVID-19 pandemic, governments around the world have deployed Keynes’ blueprint in order to limit any knock on impact from the primary shock. The goal was to prevent bankruptcies and the subsequent labor fallout of formerly healthy companies and to support the income of those recently unemployed. Thus central banks moved to facilitate credit and support capital markets, and governments provided direct assistance to businesses and households. Most notably, the CARES Act provided over $2 trillion of funding, including enhanced unemployment benefits which supported household income, grants to small businesses to support payrolls, as well as support to affected industries such as airlines. To date, this support has been remarkably effective at cushioning the economic blow from the pandemic and has buoyed the stock market. The chart below shows how disposable personal income actually increased as a result of government efforts but would have fallen precipitously without government transfers. 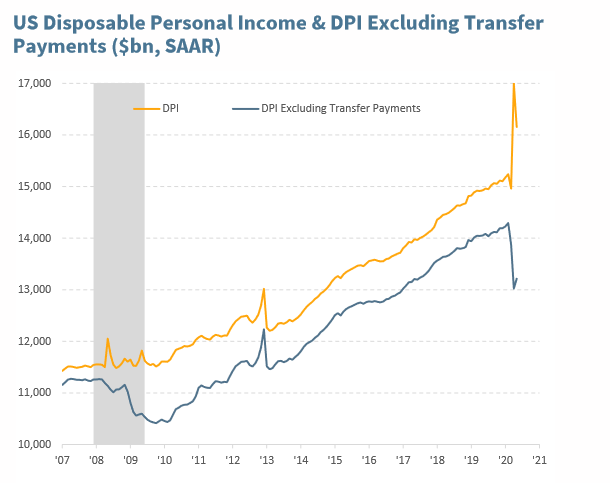 Absent ongoing fiscal support, a spiral of declining demand and rising unemployment could take hold as the pandemic is still curtailing demand in many important sectors of the economy.  As businesses and households limit their spending, this creates a knock on demand shortfall in other sectors of the economy that provided services to those directly impacted. If there is not further support from the government, layoffs and bankruptcies will rise, causing aftershocks that may last well past the end of the pandemic.

Consider demand for various goods and services in travel, entertainment and tourism, which together comprise roughly 10% of the global economy. Air traffic has recovered somewhat from its March lows, but is still very depressed relative to history. 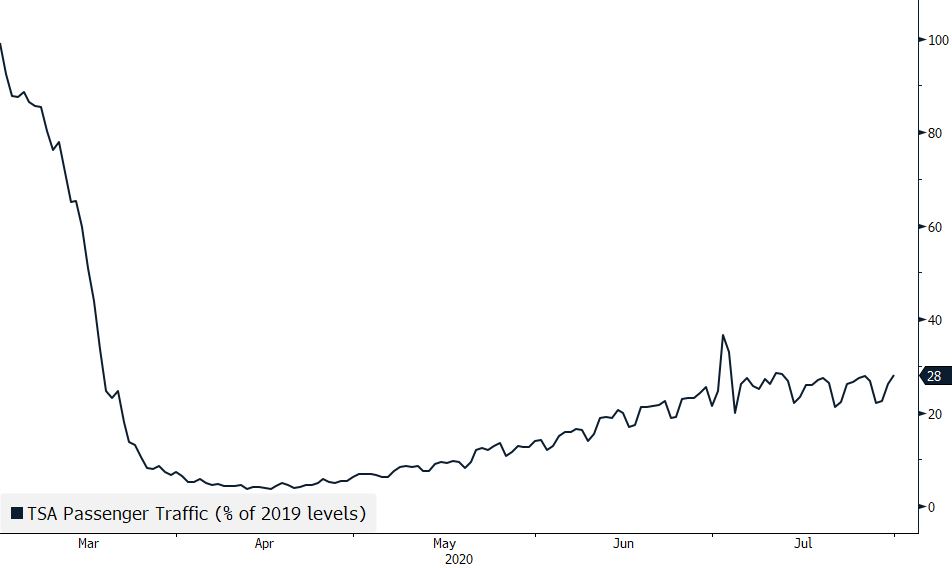 Similarly, Open Table data shows that seated diners are still down 56% year on year despite a rebound from the March lows.

Activity in these and other economic sectors will be disrupted for the foreseeable future due to the ongoing pandemic. With this backdrop, Congress is debating providing additional fiscal support. With interest rates and borrowing costs at record lows, the government has the capacity to provide additional support to the economy.

We think curtailing fiscal support now would be akin to Roosevelt’s decision in 1937 to cut spending to try to balance the budget. The U.S. economy, not yet fully healed from the Depression, immediately sank into a severe recession. The economy only recovered when spending for World War Two ramped up. Although the Federal Reserve has been very accommodating with monetary policy, we believe that ongoing fiscal support is also necessary. As Keynes observed, relying on monetary policy alone is “like trying to get fat by buying a larger belt...It is a most misleading thing to stress the quantity of money, which is only a limiting factor, rather than the volume of expenditure, which is the operative factor.” If Congress does not ultimately approve substantial additional fiscal support, we think demand will suffer and the stock market will be at risk of renewed declines in the fall.