COVID-19 Update: Examining the Economics of a Complicated Recovery

The economic data confirms that the COVID pandemic has dealt a sustained blow to the global economy. The combination of government mandated quarantines and voluntary changes in consumer behavior produced a sudden stop in economic activity in every major economy. Economic data these past few months are so bad, so far outside the realm of historical precedent, that the numbers are literally “off the charts.”  The Bank of England, which has a very long historical data set, tells us this is the sharpest decline in economic output since 1706. This presents a novel dilemma for investors.

A central question is whether to focus more on the overall magnitude of the impact, or on the pace of marginal directional changes in the data. Investors are trained to focus more on the direction and rate of change of new economic data. If conditions are improving, even from a dismal starting point, this is usually good news and often will lead to higher equity prices. Now, we are beginning to see some meaningful improvements in the economic data and the equity market has staged an impressive recovery. Despite Depression-scale levels of unemployment, global stock markets are up 33% from the lows in March and are down less than 10% for the year.

Consider initial jobless claims. First, the rise in claims is so large that it reduces all prior data to a flat line, making historical comparisons meaningless. Second, the level of new claims is declining, which is good news. But the latest weekly figure of 2.1 million new claims is still roughly four times the peak level reached during the Global Financial Crisis.

While the equity market seems to be rallying based on marginal improvement in the economic data (and some extent government stimulus), bond yields are still near record lows, reflecting the shockingly unfavorable absolute numbers.

Equity investors tend to focus on the rate of change because much of a stock’s value is derived from its expected long-term growth rate. Bond investors are more focused on the absolute ability to repay the debt: does the company have sufficient cash flow to pay an obligation?

Recent data on travel provide an even more dramatic example of absolute values versus relative change. The TSA’s measure of daily passenger traffic is up 200% since it bottomed, but is still languishing at 10% of 2019’s volume. 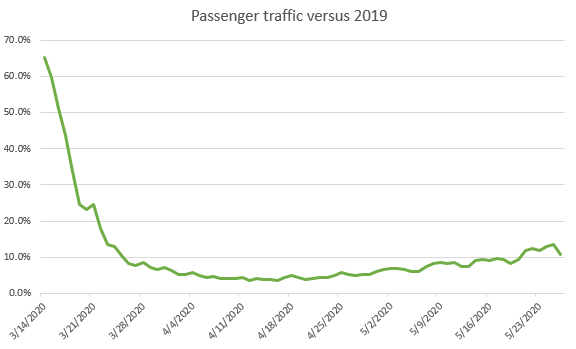 This is the cruel math of loss. A 90% loss followed by a 100% gain is still an 80% loss. It takes a far higher percentage gain to recover from a large percentage loss. Despite the 200% gain in passenger traffic, the travel industry cannot be profitable on such diminished passenger volumes.

We expect to see improving economic data going forward because current economic activity is at an historically low level. For example, if GDP growth for the third quarter of 2020 turns out to be at 20% annualized growth, this would be among the fastest in history. However, this would come after an expected 40% annualized decline in the second quarter, which follows a 5% decline in Q1.

To properly interpret the data, investors must focus on three key questions:

Various US states have lifted restrictions in a patchwork fashion, as have different countries in Europe. These disparate re-openings provide clues about how consumer behavior has changed. Data from Texas, for example, shows that the recovery in automobile traffic is patchy. Airports, hotels, and malls still lag significantly behind 2019, whereas other venues have recovered more fully. 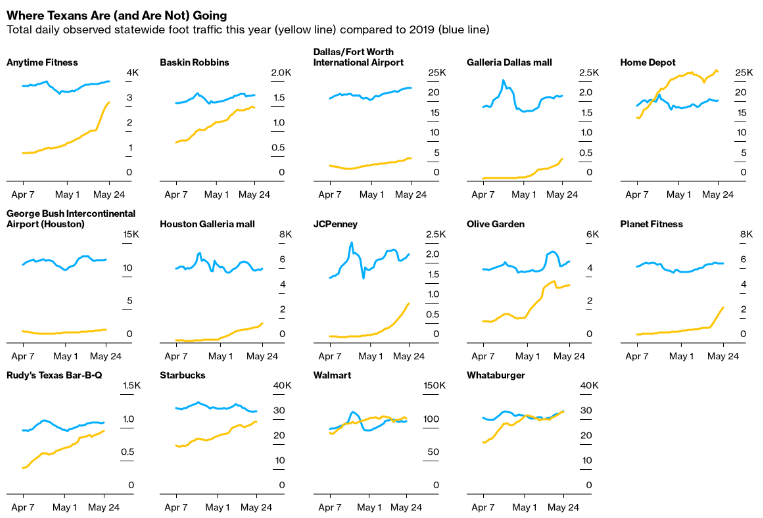 According to the chief economist at Texas A&M University Real Estate Center, Texas economic activity has improved. An index of the state’s economy increased to the mid-50s from a low of 40 in early April. But this index was at 120 in March, so economic activity is clearly still depressed in Texas and the path to normalization will take time.

Any significant normalization involving most US consumers will depend upon avoiding a resurgence of the pandemic. The risk of a “second wave” of infections does not seem to be priced into the market. Even if there is no resurgence of the virus, the return to normal has other pitfalls and will be uneven. For certain sectors such as leisure travel, consumer behavior will take a long time to recover. Household income has taken a big hit, which will affect future consumption in the absence of ongoing substantial policy support. Many businesses cannot operate profitably much below the old “normal” and business failures may increase. This would in turn slow down the employment recovery. Stock market analysts expect 2021 corporate earnings to be roughly in line with 2019 levels. Is this realistic? It is hard to say at this point. Below are the latest forecasts from the Congressional Budget Office:

The CBO projects that in 2021 unemployment will average 10.1% and GDP will be lower than the annualized level in the first quarter of 2020. Is this consistent with a recovery in corporate earnings back to 2019 levels? Only time will tell, but it would seem that such a recovery could occur only if there is, among other things, no new resurgence of the virus.

Given the level of uncertainty and the sheer magnitude of the deterioration of the economy, we remain cautious. In equities, we remain focused on seeking to identify companies that we believe have the financial strength and business flexibility to thrive in a world that does not return to “normal” for some time. By contrast, the most affected sectors would require a leap of faith, one that we do not think is worth the risk at this time.