Global stock markets rallied last week as the US and other countries ramped up economic stimulus programs to offset the impact of the SARS-CoV-2 virus. We do not believe that last week’s rally signals that the market has bottomed. As Goldman Sachs has pointed out, in the 2008 Global Financial Crisis, the market experienced six different short-term bounces of +9% or more, and some of these bear market rallies were as large as +19%. But the market did not hit bottom until March of 2009, with a total loss of more than -50%. 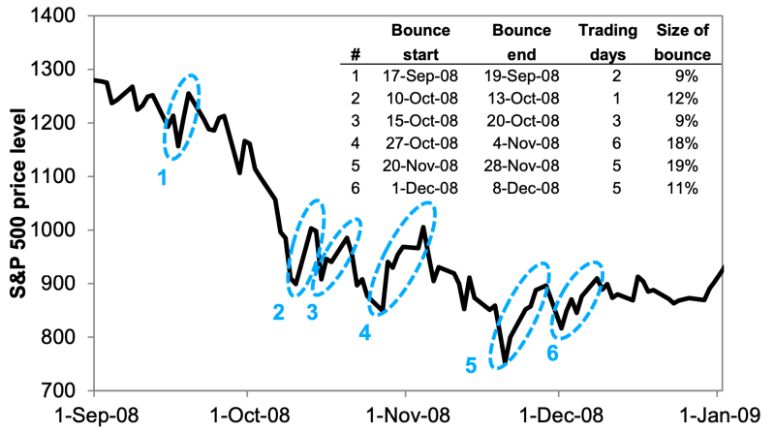 As we analyze the markets, we remain focused on the three questions that we outlined in our prior updates: 1) how much further will the virus spread and what measures will be necessary to ultimately contain it? 2) how much negative impact on supply and demand will these measures create? and 3) how large will the offsetting fiscal stimulus be, and when will it arrive?

The first phase of the current crisis was characterized by a high degree of uncertainty and fearful speculation about each of these three questions. Market volatility was fueled by each new fragment of information about the virus. Now the general answer to each question is becoming clearer, and a second, new phase has begun. We now know that the virus is spreading rapidly and extensively throughout the world, with the epicenter shifting to the United States. 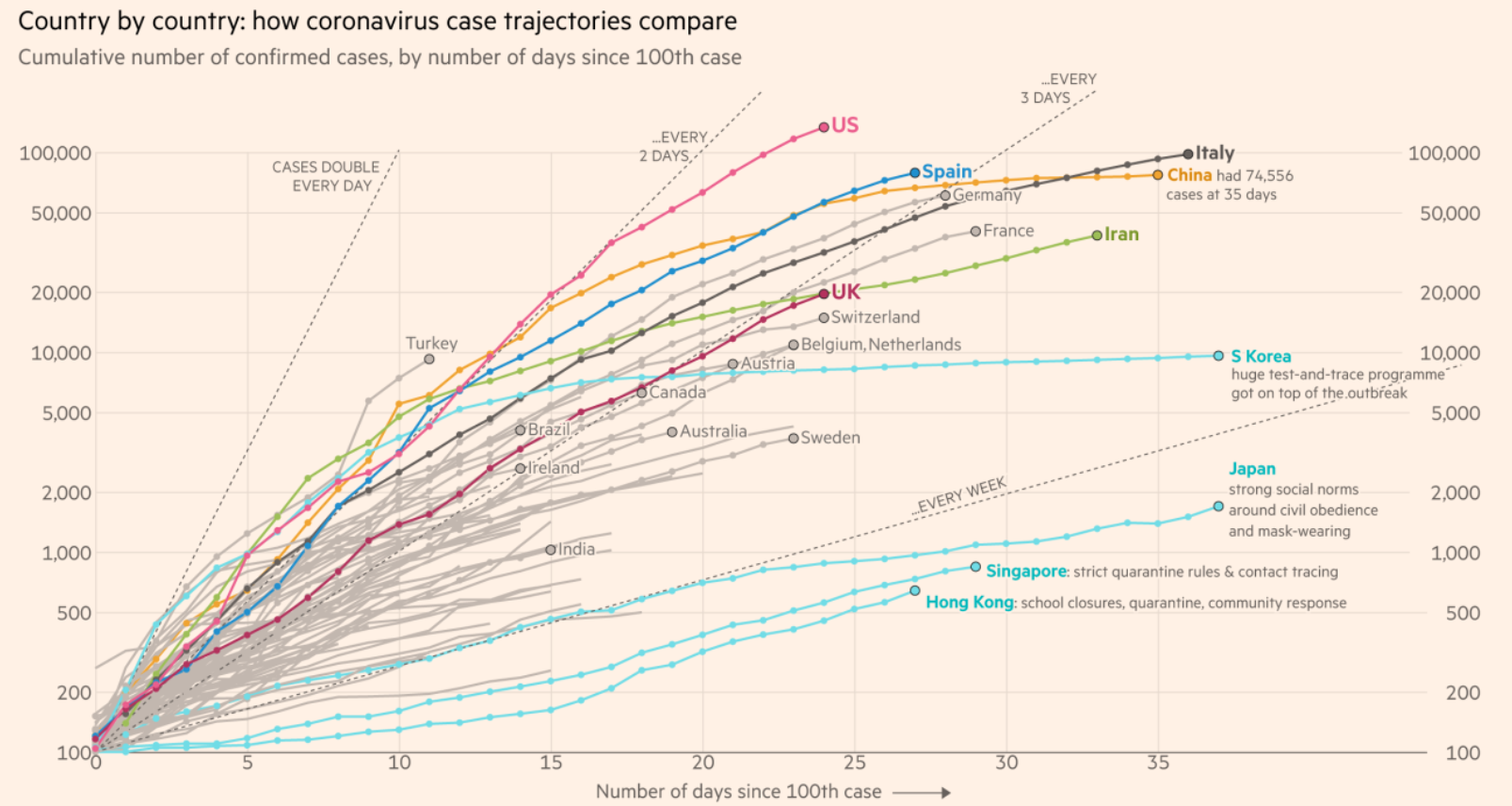 Social distancing on a huge scale will be necessary to slow the spread of the virus and limit mortality. This means a temporary cessation of economic activity in substantial portions of the global economy. The economic impact of this “demand shock” will be huge, and it is increasingly clear that the global economy is entering a recession. Like the measures to combat the spread of the virus, the economic stimulus measures to offset its effects have been patchy and uncoordinated, but this stimulus (perhaps better characterized as disaster relief) is also on a massive scale.

A key accomplishment of the first phase of this crisis was how quickly and forcefully the economic policy lessons of 2008 were implemented. This is particularly true of monetary policy. While the 2008 Global Financial Crisis centered on the health of the credit markets, this time the debt markets are the collateral damage of a global human health crisis. Led by the Federal Reserve, central banks used the 2008 playbook to forcefully intervene to preserve liquidity. Central bank intervention was the heart of the solution to the 2008 crisis, but now it plays a supporting role. This time, the “real” economy is faced with a huge demand shock as millions of consumers isolate themselves at home. Fiscal policy will be paramount to prop up demand and prevent second-order collateral damage. Last week Congress passed the $2 trillion Coronavirus Aid, Relief, and Economic Security (“CARES”) Act, the largest fiscal stimulus in modern U.S. history - equivalent to approximately 9% of GDP. This is almost twice as large as the 2008 fiscal stimulus was as a percent of GDP at the time, and it will be distributed more quickly. We expect, however, that more fiscal stimulus will be necessary in the coming months.

As we enter the next phase of the crisis, the magnitude of the health and economic damage from the virus will become clear. The health and economic data we will see in the coming weeks are likely to be shockingly bad - April will indeed be the cruelest month, and probably May as well. As we feared, the US seems to be on an infection trajectory similar to Italy, which means that mortality is likely to increase significantly. This will likely lead to renewed fear and market volatility, particularly as the scope of the economic damage wrought by the virus also becomes clear. A preview of dismal economic data came last week, with historically high US jobless claims of 3.3 million for the week ending March 21. You can see how unprecedented this is by looking at the chart below, which goes back to the 1970s. 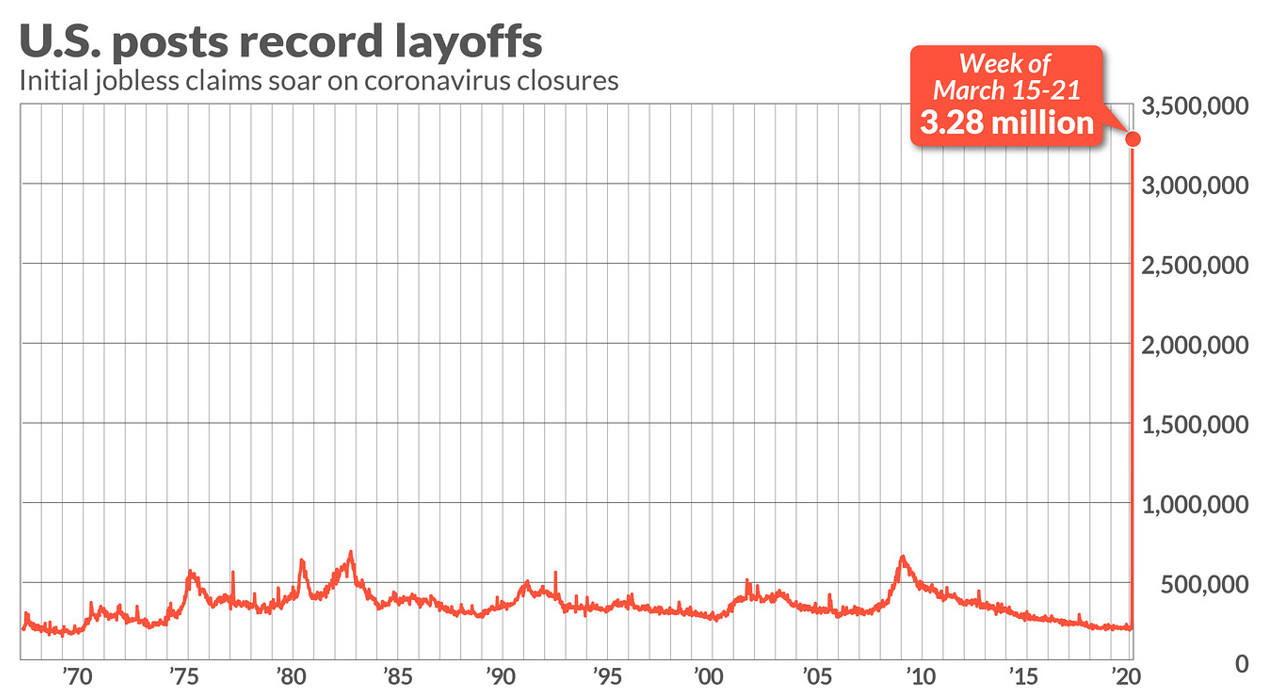 We anticipate that the cumulative decline in global GDP could be materially worse than the 2008 Global Financial Crisis. Because the outbreak of the virus hit different countries at different times, the effects will be prolonged. The US and several other developed economies have just begun to implement restrictive social distancing and some important economies, such as Brazil and Mexico, are behind the curve. China is trying to restart its economy and get back to normal but will not be able to recover without global demand. Outside of China, we expect that other emerging markets will suffer disproportionately from the effects of the outbreak and we have further reduced our exposure to emerging market stocks.

Just as the transition from the first and second phases of the crisis was marked by a passage from speculation to hard data, the final phase of recovery can only come once the spread of the virus has been brought under control. Life and the economy can only get back to “normal” if people no longer fear infection. China recently ordered the 600 movie theaters (out of tens of thousands) that had been reopened to shut again to limit possible contagion. Containing this global outbreak will take time, with prolonged social distancing measures in “hot spots” until a vaccine is available.

We expect to see dismaying health and economic data in the weeks ahead, and continue to position portfolios for high volatility. In such challenging markets, it is important to ensure that you have adequate liquidity and will not be forced to sell risk assets at fire sale prices. A sound investment strategy should ensure this, provided you stick to it, and help you to endure this outbreak. In the final third phase, when fear starts to lift and the economy is awash in stimulus, returns on risk assets may be very high and come very quickly. Markets will not wait for the “all clear” to rise, but will respond as soon as there is a likely path to containment of the virus in the US and other major economies. It is therefore important to stay invested and look for opportunities to put “dry powder” to work during periods of acute market stress. This opportunity will likely come while economic data is still quite dismal.