COVID-19 Update: Where do we go from here?

This year has been an unusually demanding one for investors. In the spring, the US stock market fell into a bear market faster than it ever had before, including during the Great Depression. By August, the stock market rebounded to new highs. Perhaps the most important investment lesson of 2020 has been the primacy of strategy over tactics. Tactical investment choices should enhance a long-term investment strategy, but not replace it. Investors who stuck to their long-term strategy this year avoided selling near the bottom and thus suffering a permanent loss of capital. Now, it is equally important not to chase returns after a period of mostly strong upward momentum. We are focused on three tactical market risks that could bring renewed volatility this fall.

ChoateIA believes that discipline and diversification are the keys to long-term success in investing. Because of this, the first steps in our investment process are to work with clients to identify the proper risk level based on their personal circumstances and goals, and then to create a long-term “strategic” portfolio that will help guide our tactical decisions. From a tactical perspective, we think that the current market is characterized by an unusually high level of uncertainty. The global COVID-19 pandemic has caused massive economic dislocation around the world, which is ongoing. Government intervention in markets and the economy is also very high relative to history. The global geopolitical order appears to be in a period of transition, with the rise of China and the pivot of the US and other nations to more nationalist policies. Technological innovation is occurring on a huge scale and disrupting a number of industries. Climate change is accelerating and having an immediate impact in the form of more extreme weather.

In response, our current tactical posture can be summarized as: be sure to have adequate safe assets, and focus stock investments on managers who invest in resilient companies with strong growth prospects. We have discussed aspects of this tactical positioning in prior market updates. In May, we pointed out that our “companies tend to be asset light (meaning they have few capital assets relative to the value of the business), have recurring customer revenues, and are the beneficiaries of ongoing trends such as the digitization of commerce, network modernization, aging demographics, and data monetization. These types of firms tend to be clustered in the technology and healthcare sectors.” We also stressed that “Investors must strike a balance between owning resilient companies at ever increasing valuations, and heavily-discounted firms that will likely outperform if the economy rebounds rapidly. We think the toll on the economy from the pandemic will be substantial.  Therefore we remain inclined to favor the resilient firms, to the extent they can be identified.  At the same time, however, we are underweight equities in general compared to long-term strategy targets, because valuations are not cheap for the types of companies we and our managers wish to hold for the long term.”

As the market rally gathered pace over the summer, it was very tempting to abandon safe assets and buy high-growth companies. We do not recommend this. Instead, we have been adding to our “dry powder” by buying core fixed income bonds and selling high yield bonds. We are focused on three potential negative catalysts for a renewed market pullback, and we seek to be prepared to use any future dislocation as an opportunity to augment equity positions.

1. COVID resurgence: The COVID-19 pandemic has had a profound effect on consumers and the global economy. While we do not expect renewed wholesale lockdowns, we expect that if there is a resurgence in cases, it would exacerbate ongoing issues and impact household confidence. Several important economic sectors remain under stress, such as retail, travel, and restaurants. Recent progress in these sectors can quickly lapse if there is a resurgence of cases. In addition, school or college closures will strain households and firms as, among other things, employees face a child care crisis.

COVID cases have declined from the June peak but are flattening at a much higher level than in May. With winter approaching, there is a high potential for resurgence. 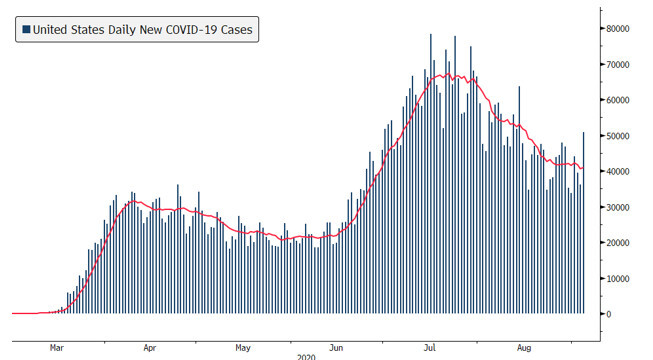 2. Inadequate fiscal stimulus: The more than $2 Trillion in fiscal stimulus from the CARES Act actually led to an increase in household discretionary income despite the rise in unemployment. This cushioned the blow from the pandemic and sustained consumption. Absent fiscal transfers, household income would have declined significantly. At present, the market seems to be assuming that there will be a compromise by the end of September on further fiscal support, with renewed spending on extended unemployment benefits and aid for state and local governments. However, even the proposed reduction to $400 from $600 per week of additional unemployment benefits will impact the economy. As the chart below shows, economists predict that if there are no further supplementary unemployment benefits, personal consumption expenditures could drop by more than they did during the 2008 Great Recession. 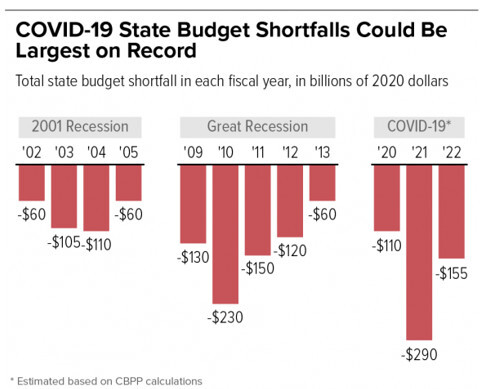 3. Contested US presidential election: A contested election, where the outcome of the presidential election is in doubt for several weeks, would cause significant market volatility. Given the challenging economic backdrop, the pandemic, and the level of political partisanship, we would expect a more extreme market reaction than during the Bush-Gore election of 2000.

As we position client portfolios to deal with these three potential risks, we always weigh the prospective benefits of positioning ahead of a catalyst with the possible opportunity cost if such an event does not happen. We are also mindful that markets are forward-looking and these three risks are likely already priced in to the market to some degree. For example, by examining futures volatility contracts, we see that the market expects a spike in volatility around the election. 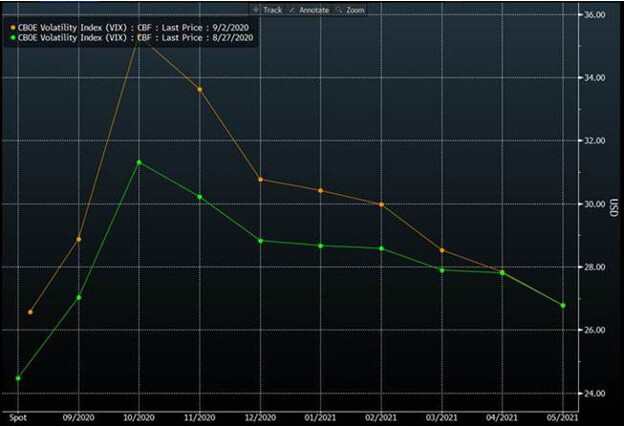 This means that a clear victory for either candidate could lead to a relief rally, and being too defensive may be a mistake, as at the very least some of these concerns are priced in.

However, on other metrics, investors have been quite complacent about future risks. For example, the relative strength index is near highs that typically indicate an overbought market.

The fear/greed gauge also shows significant optimism. This includes several measures of market risk ranging from the comparison of spreads on high yield bonds vs. investment grade bonds to market breadth and the number of stocks reaching 52 week highs. This is typically a contrarian indicator as the time to buy is when fear levels are high.

Finally, in the options markets investors have been buying more calls but the purchase of puts has been steady. Puts provide downside protection to investors and the lower volume of put purchases relative to calls shows that the market is not dominated by worry right now. 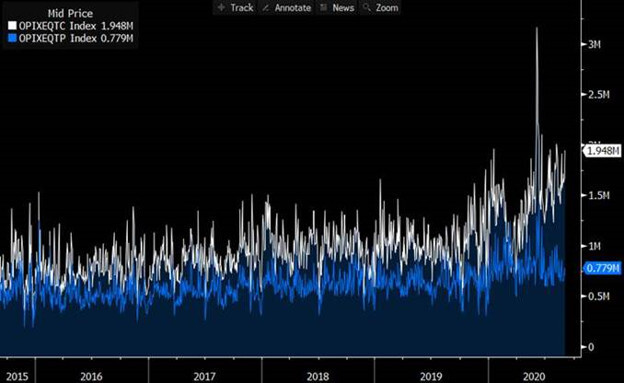 This investor optimism is reflected in high current valuations, and reinforces our conviction that the three risks we described above are not fully priced into the stock market. Instead, investors appear to be currently optimistic that the economy is on a steady recovery path. There is concern regarding the election, but not so much for a near-term COVID resurgence or breakdown in fiscal support. Weighing all of the relevant factors, we would not, however, recommend departing materially from your long-term strategy by raising significant cash. As the rapid market decline and rebound earlier this year demonstrated, strategic discipline is key to long-term success, with incremental tactical moves to enhance the strategy, not to replace it. Indeed, it is possible that we may see upside surprises on both fronts: an effective vaccine may be developed more quickly than anticipated for the virus, or Congress may yet pass meaningful further fiscal relief. This is why we recommend tactical caution within the context of an appropriate long-term strategy.